Center for Limb Loss and MoBility

The foot is a complex mechanism capable of being both a mobile adapter during weight acceptance and a rigid lever arm during propulsion. The combination of the talonavicular and calcaneocuboid joints (the midtarsal joint) is thought to play an important role in this transition. There has been little quantitative analysis of the midtarsal joint locking mechanism. Manter4 described the axis of rotation for the talonavicular and calcaneocuboid joints. The motion of these joints was described with two axes: the longitudinal axis, which rises up from the floor anterodorsally at 15˚ and is rotated medially 9˚ from the midline, and the oblique axis, which rises anterodorsally from the floor at 52˚ and is rotated medially 57˚ from the midline (Figure 1). The former axis describes motion primarily in the frontal plane (inversion and eversion), while the latter describes motion in the sagittal plane (flexion and extension).3,4,9 Elftman3 postulated that the midtarsal joint axes of rotation function in concert with the subtalar joint. The axes are parallel when the hindfoot is everted, resulting in a foot that is flexible, and the axes are skewed when the hindfoot is inverted, greatly reducing the flexibility in the joints (Figure 2). However, neither of these early studies presented data to support the theory of midtarsal joint locking. Others have discussed how the Evans calcaneal osteotomy can restore midtarsal joint locking2 and a case study explored the relationship between ankle sprains and aberrant midtarsal joint behavior.5 There also was one study that measured the effect of hindfoot inversion and eversion on forefoot inversion and eversion.8 However, measurements were made with a handheld device that the authors stated was repeatable to ±2˚, but no accuracy data were presented. More recently, Chi et al.1 used an inclinometer to demonstrate increased sagittal plane motion in the second metatarsal during calcaneal eversion compared to calcaneal inversion. However, these results were limited to one bone and one degree of freedom. 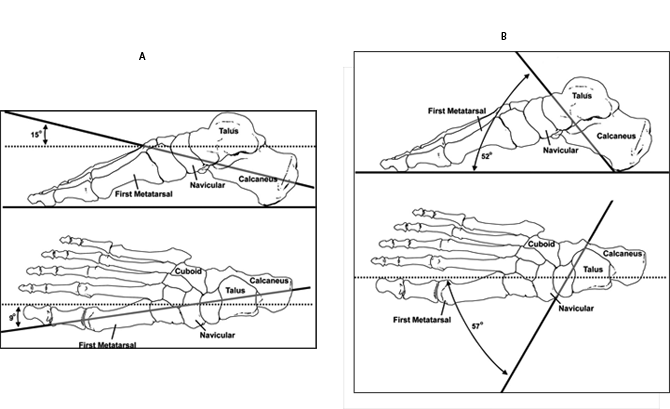 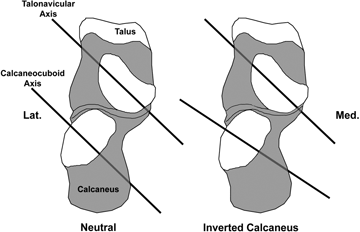 Nine fresh frozen cadaver feet (four male and five female) 87.6 ±7.9 years of age (mean ± S.D.) were used for this institutional review board approved study. Feet were excluded if they contained a gross midtarsal or subtalar joint defect. Specimens included 12 cm of the distal tibia and fibula. We dissected the soft tissue (skin, fat, muscle, and tendon) from the tibia, fibula, and talus as well as from the dorsum of the foot. The talus was fixed to the tibia in a neutral hindfoot position with the ankle at 90˚ by three carbon fiber rods:

The tibia was secured with PMMA into a 7.68 cm ABS pipe that was in turn mounted in our experimental apparatus. This device consisted of two acrylic plates supported by four acrylic rods, and it allowed hindfoot and forefoot motion while holding the tibia and talus in a constant position (Figure 4). A clamp, used to properly position the forefoot, was attached over the metatarsal heads; it consisted of two acrylic pieces and two nylon screws. Strings were connected from the forefoot clamp to a series of winches on the bottom of the jig through holes drilled in the top of the acrylic plate. For each position the forefoot was moved into place, secured by hand and fixed in place by the strings and winches. The hindfoot was similarly held in position with additional strings and winches, which were passed through a hole drilled in the anterior calcaneus. (The hindfoot was always positioned before the forefoot.) When positioning either the forefoot or the hindfoot, excessive force was not applied to reach the end range of motion. The loading levels, while not quantified, were typical of what might be applied during a clinical examination.

Metal fixation could not be used with our apparatus because Polhemus Fastrak sensors (accuracy 0.15˚ RMS error and 0.08 cm RMS error) were used to quantify positional data from the bones. According to a previously described protoco,6,7 the electromagnetic sensors were attached by carbon fiber rods to the calcaneus, talus, tibia, navicular, cuboid, and the first, second, and fifth metatarsals. All measurements were made statically; before any data was collected, the foot was positioned by the strings and winches and held for 30 seconds to account for soft tissue creep. With only four available sensors, three trials were needed to obtain data from all of the bones of interest. The tibia and talus sensors were held constant throughout the three trials, while the third and fourth sensors were moved from the calcaneus and cuboid to the navicular and first metatarsal and to the second and fifth metatarsals (Figure 5). Nylon screws, specialized acrylic blocks, and Velcro™ were used to ensure the constant position of the sensors on the rods.

Data were collected from nine positions. First, the foot was placed in an approximately neutral position. Since the talus was pinned to the tibia in a neutral position with the ankle held at 90˚, the talus was always in neutral and the only motion of the foot when it was sitting in the apparatus with no load applied was a slight amount of dorsiflexion due to gravity because the feet were upside down. Next, the hindfoot was placed in maximal eversion, while the forefoot was placed in four positions: maximal plantar flexion, dorsiflexion, forefoot inversion, and forefoot eversion. The protocol was repeated with the hindfoot in maximal inversion. Feet were randomly selected to start testing in either ion or eversion.

The angular data for each bone were processed as follows. The sensors that were attached to each bone had been arbitrarily positioned. Therefore, to determine their zero position, we used a static transformation to align the initial neutral position of each sensor with the global reference frame. In effect, the zero position of each bone was aligned with the global reference frame. Because the tibia was fixed in PMMA and the talus was pinned to the tibia, there was minimal motion of the talus relative to the global coordinate system. For each of the eight test positions, the location of each bone relative to the talus was calculated. The data were transformed and presented as projection angles relative to the global reference frame (which was essentially the talar reference frame). The frontal (rotation about X) and transverse planes (rotation about Z) data from the left feet were multiplied by −1 so that all the feet were considered with a right foot coordinate system. Peak angular motions of the tibia and talus were used to determine if there was motion between these two bones. Likewise, peak angular motion of the calcaneus was used to determine hindfoot position. However, for the other bones (first, second, and fifth metatarsals, as well as the navicular and cuboid), only range of motion data were studied. We considered the range of motion of each bone in the three cardinal planes from peak forefoot dorsiflexion to peak forefoot plantar flexion and from peak forefoot eversion to peak forefoot inversion. Paired t-tests were used to examine the effect of hindfoot position (eversion or inversion) on the range of motion of the forefoot (plantar flexion/dorsiflexion and forefoot inversion/eversion). A 0.05 statistical significance was chosen.

We also were able to mechanically ground the tibia and talus. The average peak angular motion between the tibia and talus in all three cardinal planes was 0.49˚ ± 0.76˚. Of all tibia-to-talus data taken, 95% were less than 1.5˚ and all data greater than 1.5˚ (35 angular measurements) were from just two feet (29 from foot 7 and 6 from foot 6).

For the sample size we tested, no significant difference in the frontal plane range of motion from forefoot eversion to inversion of either the navicular or cuboid while the hindfoot was everted or inverted was detected (p = 0.2 and 0.8, respectively). Therefore, our second hypothesis, namely that there will be increased motion in the frontal plane of the navicular and cuboid during forefoot eversion and inversion when the calcaneus is everted rather than inverted, was rejected. With the sample size available, there were no other significant differences in range of motion for any other foot bones. Stated in another way, for the number of specimens we tested, hindfoot position (inversion or eversion) had no effect on the range of motion of the forefoot or midfoot bones during maximal forefoot eversion and inversion.

By using electromagnetic sensors, we were able to quantify differences in forefoot motion as related to calcaneal positioning. We found that the first, second, and fifth metatarsals had increased motion in the sagittal plane during dorsiflexion and plantar flexion when the calcaneus was in eversion as compared to inversion. This is consistent with the idea that there is more forefoot motion when the calcaneus is everted than inverted. There was no increase in the motion of the navicular or cuboid in the frontal plane when the forefoot was inverted and everted while the calcaneus was everted as compared to inverted. However, we did observe a nonsignificant increase in frontal plane motion in the navicular when the calcaneus was inverted as compared to everted during dorsiflexion and plantar flexion. This may indicate that the talonavicular axis has shifted, but this finding requires further research. This study supports the clinical observation that the foot is more flexible when the hindfoot is in valgus. However, the position of the midtarsal joint cannot fully explain the increased flexibility because the motion of the navicular and cuboid did not significantly increase.

Get help from Veterans Crisis Line

If you are in crisis or having thoughts of suicide, visit VeteransCrisisLine.net for more resources.