Center for Limb Loss and MoBility

Introduction: Transtibial amputees are unfortunately an expanding patient population in the Department of Veterans Affairs. Improvements in body armor have saved lives, but the conflicts in Iraq and Afghanistan are producing a greater proportion of amputees than any prior US military conflict. These young, active amputees are demanding more from their prosthetic limbs and our Center is responding by helping to develop the next generation of prosthetic feet. Lower limb amputees expend up to 50% more metabolic power to walk at the same speed as intact individuals, contributing to increased fatigue and reduced mobility. Our collaborators at the University of Michigan have developed a new prosthetic foot technology designed to reduce the metabolic energy demand of amputee gait. The technology, Controlled Energy Storage and Release (CESR), uses a microprocessor-controlled spring mechanism to capture and store elastic energy during heel strike. Unlike conventional spring designs that return energy spontaneously, the CESR mechanism can optimally adjust the timing of energy release. It delays the return of energy until push-off, where it acts as a partial substitute for the intact ankle. This design has been shown to reduce the energy penalty of ambulating with a prosthetic foot by 40%.

Objectives: This study will develop and refine the CESR foot to optimize the performance for Veteran amputees. 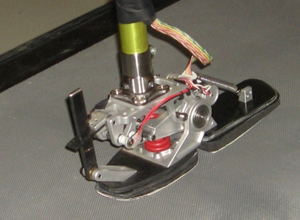 Second generation CESR foot worn by a subject walking on a treadmill.

Methodology: An iterative process of design, testing and re-design will be utilized. Computerized gait analysis will be used to define the motion, moments, and power produced by the CESR foot while worn by amputees. Metabolic cost will be collected across a range of walking speeds to determine the efficiency of ambulating with the foot. Larger-scale long-term testing of a prototype foot will take place in year two of the grant.

Clinical Significance: The active, young Veteran amputee returning from OEF and OIF will have substantially greater functional performance demands than older Veteran amputees. Development of a prosthetic foot that can store energy and release it during push-off will improve mobility and efficiency in these Veteran amputees. 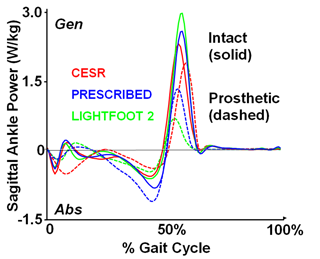 Findings: Human subject testing of the second generation CESR foot was completed (n=7). Metabolic efficiency and biomechanical analysis were used to compare the performance of the CESR foot with three springs of different stiffnesses. The optimal spring was identified and used for further comparison of amputees wearing the CESRfoot (with optimal spring), the Seattle LightFoot 2 (a common, energy storing and return foot), and their originally prescribed prosthetic foot. An increase in ankle push-off power and positive ankle work was found for the CESR foot. Despite this increase in mechanical energy return, metabolic efficiency during ambulation did not improve. Currently, we are exploring possible reasons for this lack of metabolic improvement, which we intend to address in the design of the next generation CESR foot.

Milestones: (1) Human subject testing was completed for the second generation CESR foot (n=7). (2) One abstract was accepted for presentation at the Association for Academic Physiatrists annual meeting in April, 2010. Another abstract was accepted for presentation at the JEGM conference in May, 2010. (3) The manuscript entitled, “Recycling energy to restore impaired ankle function during human walking” was published in the Public Library of Science. (4) Three manuscripts are currently being prepared for publication. (5) The next generation CESR foot is under development, designed to be lighter, more adjustable with respect to foot length and have improved rolling shape characteristics.

Get help from Veterans Crisis Line

If you are in crisis or having thoughts of suicide, visit VeteransCrisisLine.net for more resources.